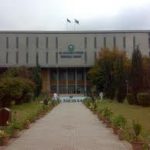 Islamabad: Quaid E Azam University is under criticism for negligence in a recent case of sexual harassment of a female student of MBA, who is in the fifth semester. The student was apparently sexually harassed by the professor of School of sciences, when she went to inquire about her marks for the concerned subject. The student has accused the professor for sexually harassing her before she hurriedly ran from his room and in her haste forgot her dupatta in his office.

The case is under investigation, although the professor is denying such allegations, stating that he has been associated with the profession of teaching for three years and if the allegations are investigated and are proven false, then he will resign from his post. The student states that she had informed the office staff that she was going to come to the professor’s office after the lunch break.

The vice chancellor Dr Eitazaz Ahmed however spoke in the favour of the professor stating that the girl belonged to a group which was already under investigations by the institution. He said the case was about marks and was not easy to handle. He also said that this may also be an attempt to defame the professor.